Virtual Unconference: Migration – Underrepresented But Key to Achieving the SDG’s 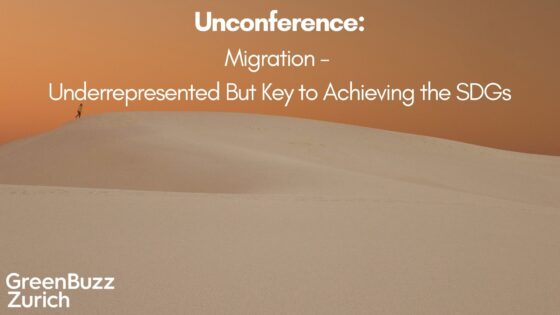 Due to Covid restrictions, this event will take place on Zoom.

In the 2030 Agenda, migration was recognized for the first time as a crucial contributor to achieving sustainable development. The fact that migration is relevant to 11 out of the 17 SDGs is proof of exactly that.

A specific example for the link between sustainable development and migration, and why it is such an important issue, are the migrants who flee their origin countries because climate change made living conditions unbearable.

But even though the relationship between migration and the SDGs is increasingly recognized, it is still an underexplored issue, and the implementation of existing programmes of support for migrants is often insufficient. This is a problem considering that migrants are often economically very active, a source of cultural diversity, and thereby significantly contribute to innovation and economic growth.

An example for this is Switzerland, as migration is integral to the Swiss economy and businesses. Switzerland is among the countries in Europe with the highest percentage quota of foreigners in comparison with its permanent population (which is also due to Switzerland’s strict naturalization policies). Guest workers recruited from the EU or EFTA States and their families make up the largest group of foreigners in Switzerland with roughly 80 percent of the foreign resident population.

This has led some groups to depict migration as a threat to the Swiss population, which culminated in the referendum last month, calling for the repeal of the agreement on the free movement of persons between Switzerland and the member states of the European Union (EU). The vote took place in an already ongoing debate regarding the role of migration within Swiss society with the example of the 2009 minaret ban and the 2017 facilitated naturalization referenda. Thus,  migration has often been framed negatively in the public media in Switzerland and hence the relationship between the SDGs and migration in Switzerland has often been neglected.

However, the multilateral nature and the political traction of the SDGs are crucial in the migration discourse. Because migration requires coordination between multiple actors and enhanced coherence across policies. “This kind of coordination is only possible with high-level buy-in, something the SDGs have already secured. Furthermore, the SDGs’ multi-disciplinary nature increases the potential for multi-stakeholder collaboration.” Swiss Agency for Development and Cooperation SDC

We are happy to have experts talk to us about this topic including:

Join us for this Unconference to discuss this topic with experts and sustainability professionals!

This open-space format allows for much space and time to discuss the topic at hand. Participants play a key role in the event and can decide on the specific discussion points themselves.

Who is it for?

Employees of our corporate partners can gain free tickets for this event. Please check here if your employer is a member of GreenBuzz and use your corporate discount code to register.